I wanna start this blog off by saying that the performances that Vin Diesel and Guy Pearce give off in this movie are absolutely flawless and fantastic, I was really blown away with how well they played the characters that they played in the movie, Vin Diesel played this super human called Ray Garrison, who gets his super powers after he and his wife, Gina Garrison are both murdered at the beginning of the film, Ray is brought back to life in a science technology lab called RTS, Ray finds himself to have become this super human who is pretty much immortal, but can’t remember how he died, or what his past life was like, but suddenly it all comes triggering back to him as to how he died and he sets out on a mission to kill the man who killed him and his wife

I really did enjoy watching this movie at the cinema because not only did it have two fantastic actors, Vin Diesel and Guy Pearce, but it also has an amazing story to the movie and an amazing twist that will leave cinema goers really shocked and for those of you who have already seen this movie I’m sure you were also blown away by the twist in the movies plot because I certainly was

I also loved the visual effects on this movie as well I thought they were extraordinary especially when Ray does get shot and the fact that all his skin particles as I will call them all come back to his face because of his immortality, but I also loved this one scene in the movie where they set up a scene for Ray and Emil Harting played by Guy Pearce come face to face in this really lovely setting I just really loved the visuals throughout the movie and I also loved the fact that they had all these slow motion scenes in the movie and fast pacing scenes in the movie too I really thought this movie was edited so well

One character to look out for in this movie is Wilfred Wigans because his character is absolutely hilarious, he had some really funny lines in the movie, which made his scenes very comedic to watch in my opinion 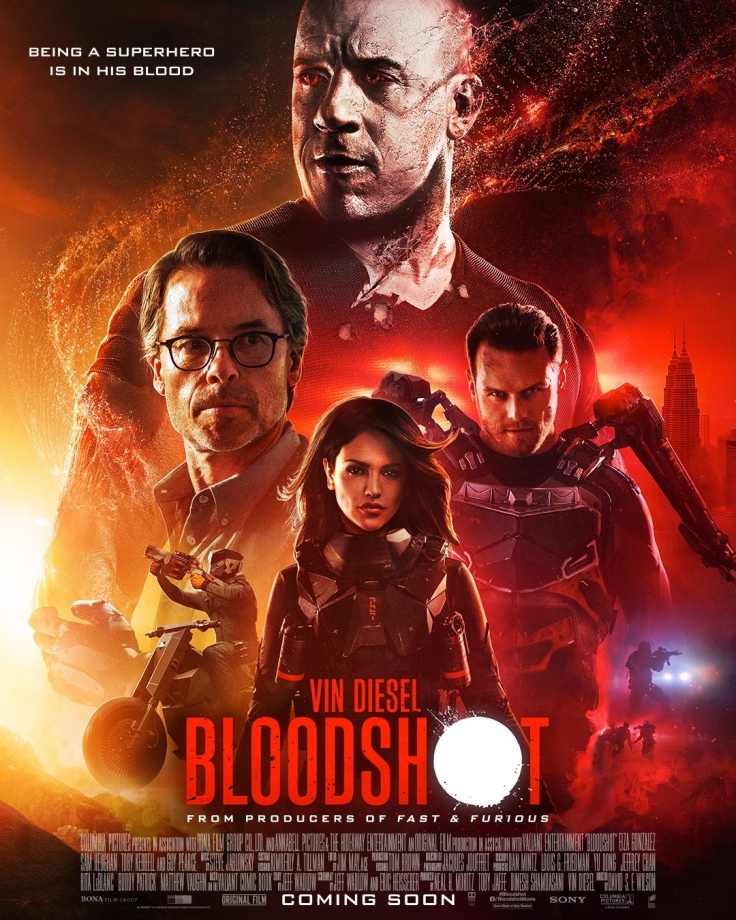 There is a lot of strong language throughout the movie as well and the running time of this movie is about an hour and forty nine minutes long as well, there was loads of action in this movie and it’s also a movie from the producers of Fast and Furious which doesn’t surprise me as to why Vin Diesel is in this movie but he still played the character of Ray brilliantly though

I also wanna add that there is a scene where the character KT is underwater and those underwater scenes that she featured in the sequence that she does underwater was filmed amazingly too, I really did enjoy this movie more than what I thought I was going to enjoy it which is a good thing

Would I recommend this movie to family and friends? Well of course I would if you’re looking for a movie to watch at the cinema at the time of me writing this blog and stuck on what to watch at the cinema then make Bloodshot the movie you go and see because it’s an action packed movie and I would also recommend this movie to anyone out there who likes Marvel or DC for that matter because it also has the comic book vibes in the movie as well