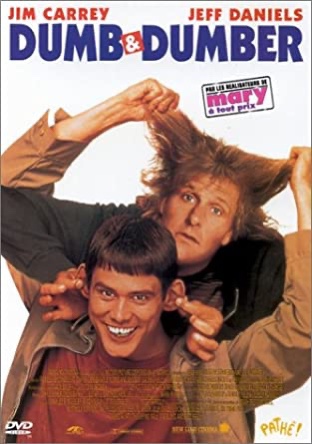 Welcome to the next movie review that I have for you here on my blogging website SteveOfficial – this is a very classic movie and one which I only managed to get around to watching earlier this month – this movie is called Dumb And Dumber its a movie that was released in 1994, and its only taken me to this point in my lifetime to watch it – how did I watch it you ask? I watched it through the streaming service Netflix and the movie is available to watch on the streaming service at any time at the push of a button, so if you have not yet seen this move then please do check this movie out because it’s outrageously funny

The movie stars Jeff Daniels who plays the character Harry Dunn and Jim Carey also stars in this movie who plays the character Lloyd Christmas, these two guys are best friends and have known each other pretty much all their lives by the looks of their chemistry, and they are pretty much these two dumb characters I would like to think they are based on the title of the movie but it’s their dumbness that’s brings the comedy side of the movie out to the forefront

When Lloyd drives a customer to the airport called Mary she takes a briefcase with her but drops it at the airport, Lloyd tries to chase after her noticing she’s left the briefcase behind and fails to find her, so takes his best friend Harry to Aspen when she was setting off to and goes on a mission to track her down and give her the briefcase back, it’s such a hilariously funny film and I really enjoyed it and I hope that if you read this go away and watch the movie yourself if you have never seen it or want to rewatch it again then I hope hat you get the same enjoyment out of this movie as what I did watching it