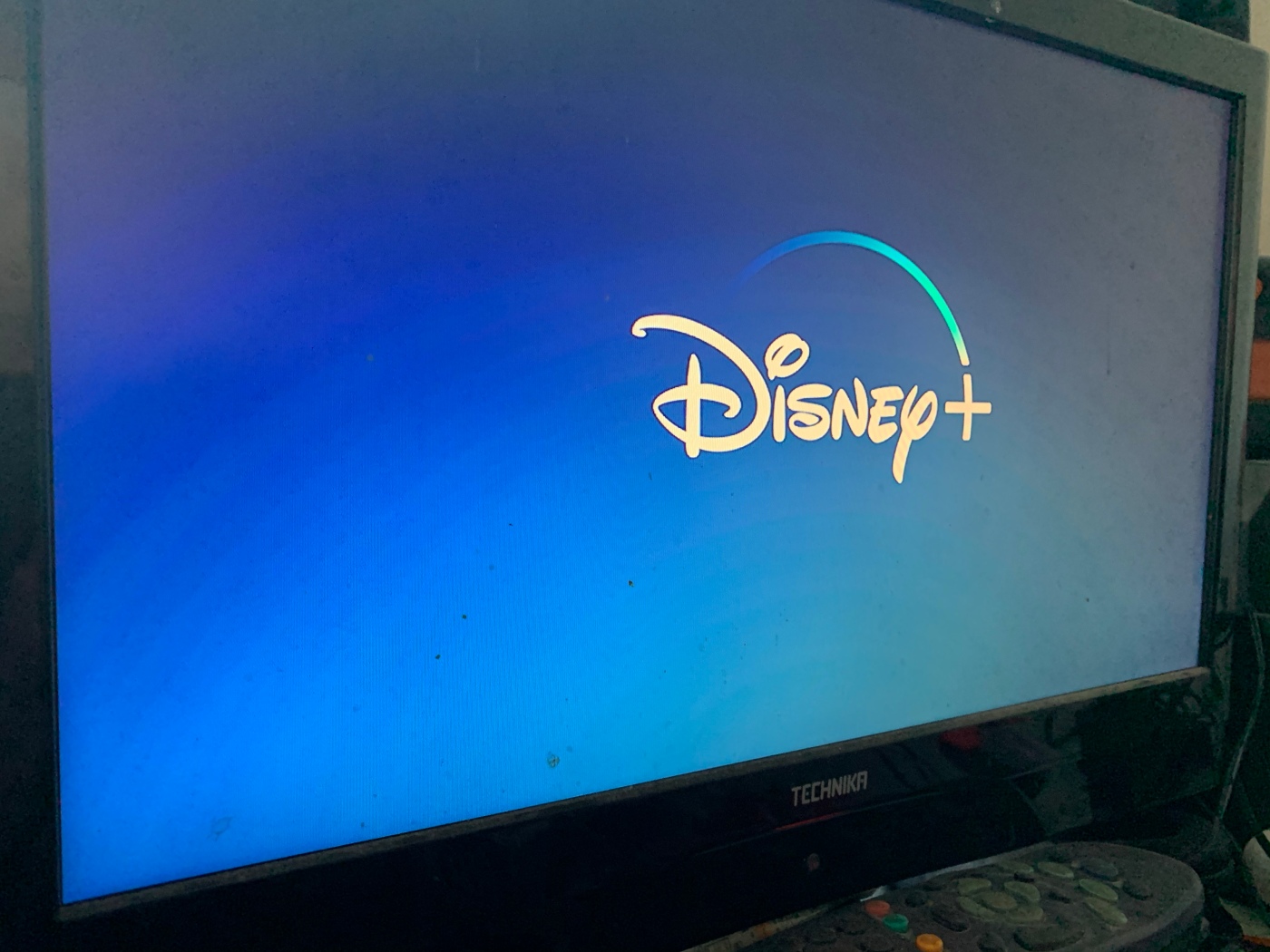 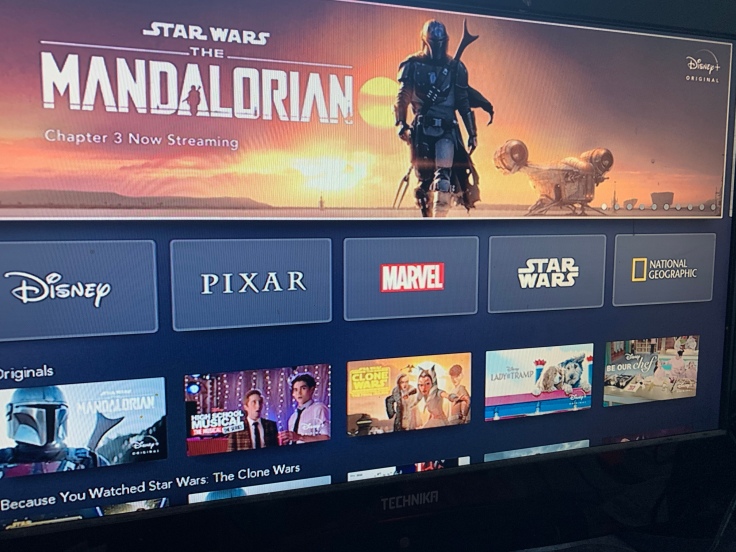 Welcome to my Disney+ review, Disney+ launched in the UK on 24th March 2020… and it such a fantastic streaming service well I am finding some really impressive reviews online and when looking at the app myself, it looks and feels amazing just the layout of the app and then you have the shows, the movies, the original content and even the short films that Pixar have been doing for the last 25 years or so… it’s so good and I wanted to delve deeper into my thoughts on the streaming service

Now to be honest I haven’t been watching too much content on the streaming service because I haven’t really been feeling too good over the last week at the time of writing this, I have been feeling feverish and developing a slight cough but wasn’t continuous though, so I have had a week off work because of it and because I have had to self isolate for a week, but I have of course been watching a little bit of the content that Disney does have to offer which includes The Mandalorian, Lamp Life and so much more

Without going into too much detail Disney launched on 24th March with two episodes of The Mandalorian which meant we got to see the introduction of Baby Yoda also known as The Child, Baby Yoda is so damn cute and adorable, I’m not gonna go into full details as on the 2nd May I will bring you a full season 1 review of The Mandalorian on my blogging website, I do know that this season does contain 8 episodes and at the time of writing this blog we currently have 3 episodes on the service, the new episodes will be streaming from every Friday morning at 8am until 1st May which is when the series finale will be available to stream 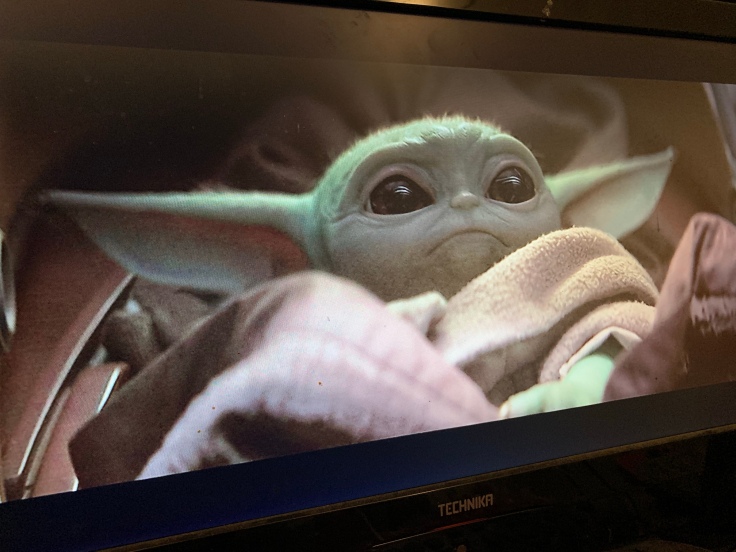 I wanna move on to the first thing that I watched on Disney+ which was called Lamp Life, Lamp Life is such a beautiful short 7 minute film which is based on Bo Peep and we tale a look at what happened to the character between Toy Story 2 and Tou Story 4

There are some other short films that I have watched on Disney+ recently such as Float… Float is a very short film about a father who’s son is abnormal to the rest of the children in the area, his kid has the ability to fly in the air and of course it causes a lot of kids and parents watch on and look at his kid differently to any other kid they see in the neighbourhood, it’s definitely a short film that does tug on the heartstrings 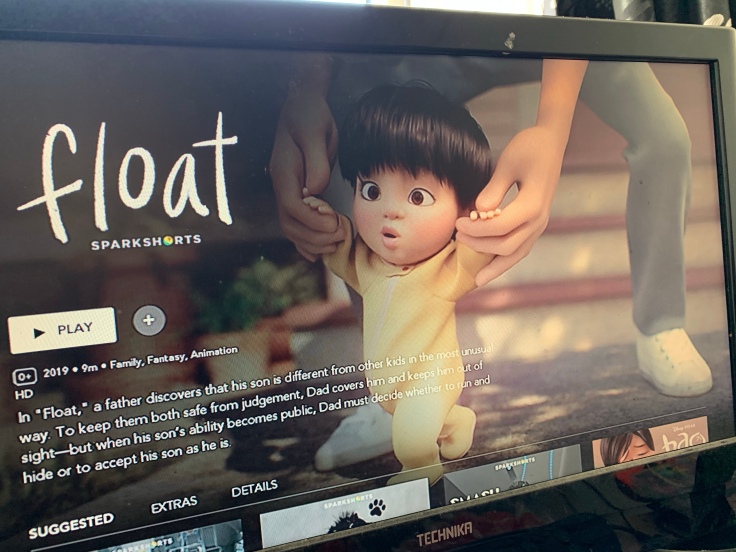 The next short film that I watched on the service is called Purl… Purl is a short film about a ball of yarn who works in the office full of men, Purl is different from the others because the men are humans, Purl is a ball of yarn and is also a woman, it’s such a good short film because it’s keeping up with today’s society in the workplace about equality in the workplace such a good short story although it does have a little foul language in this short film which I am surprised about because this is a Pixar family friendly short film 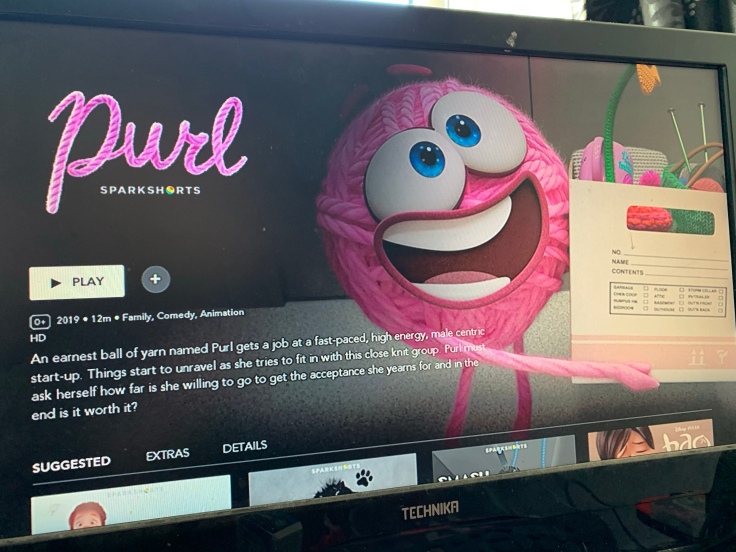 I have also watched another short film called Kitbull and it’s about cat who wonders the street and is able to find shelter, now from what I could get from this short film is that the dog gets abused by his owner, again this pulled on my heartstrings especially when I am a lover of dogs and the cat and dog becomes good friends and the cat helps the dog to escape his abusive owner, the animation on this is absolutely fantastic and would recommend that you should watch this if you have already got Disney+ or currently debating getting the new streaming service 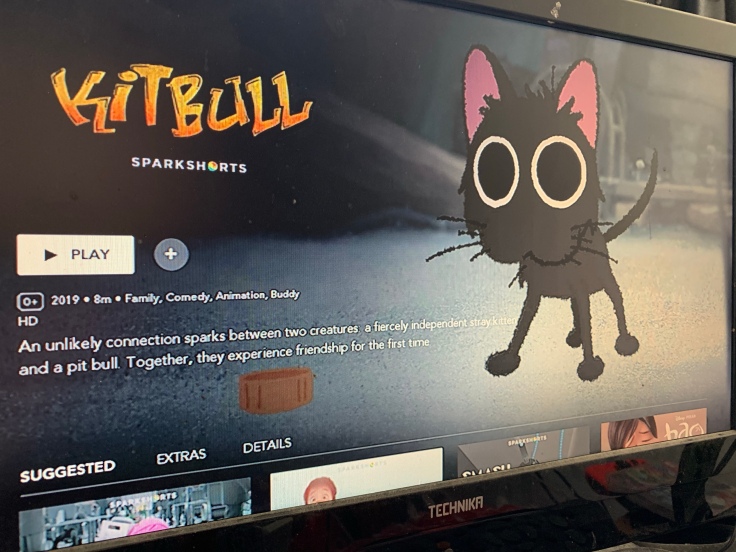 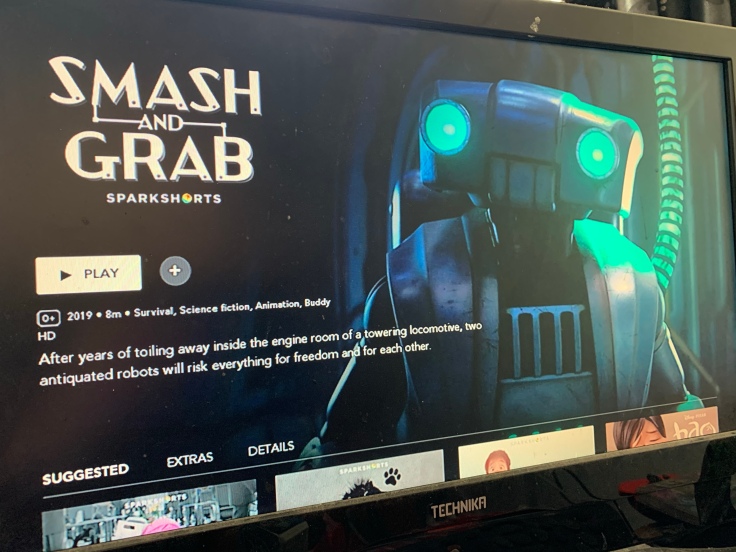 There’s only one TV series that I am currently watching at the moment on Disney+ which is called Star Wars The Clone Wars The Series now I am not gonna fully review this e-cards I am in the middle of watching Season 1 of this show, I believe this show has either 7 or 8 seasons so once I have watched this then I may review the show entirely and give you my thoughts and opinions on the show and let you know whether it’s worth a watch or not, I can tell though at the time of writing this I am now on the 13th episode out of 22 episodes on Season 1 of this show, so I think you can tell that I am already enjoying this TV series on the streaming service 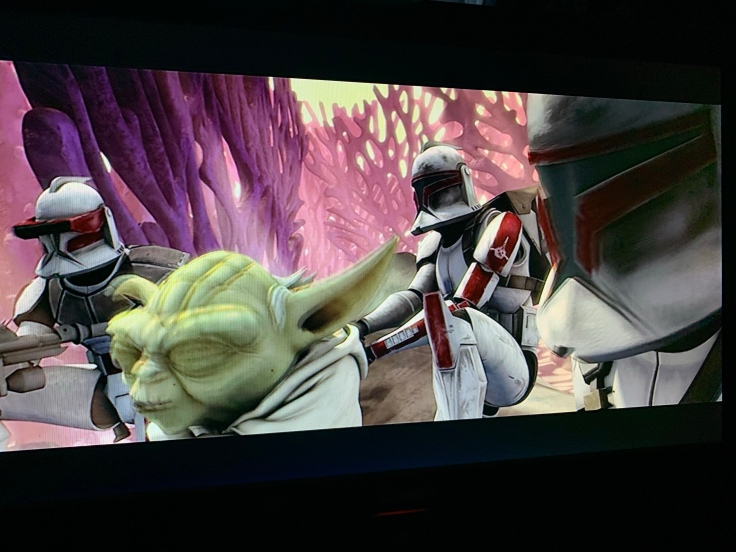 There’s plenty for me to talk about the streaming service though because there’s so much content that I am still gonna be watching over the coming weeks and coming months, now Disney+ had this amazing offer which I signed up before at the beginning of March, so for the first year I am paying for the service for £49.99 and then from next year I’ll be paying £59.99 a year for the service but given what you get on the streaming service I wouldn’t complain about that at all, you get lost the Marvel content, all Star Wars content, most Disney content, all Pixar content and most National Geographic content too

There are some other shows that I would love to explore, I have heard that High School Musical The Musical The Series is really good, along with the live action version of Lady And The Tramp, as well as Encore, One Day At Disney, Disney Weddings and The World According To Jeff Goldblum… those are some of the content that I have heard very positive reviews about

I will of course be reviewing some of the content from Disney+ in the near future on my blogging website and given the current state of the world right now as I won’t be visiting any venues or watching any newly released movies at the cinema until further notice it is looking likely that I will be reviewing more content from the likes of Netflix, Prime Video and Disney+

I do have a wish list of things that I’m hoping Disney will add to the streaming service in the future though, Sonny With A Chance, Cory In The House, I’m In The Band, Zeke & Luther and House Of Mouse are shows that I grew up with as a child and while I am very pleased with the childhood TV shows that the streaming service is offering such as Wizards Of Waverly Place, Hannah Montana, Good Luck Charlie, Recess and Timon & Pumbaa but I would also like to see the aforementioned shows that I wish to be on the service get added to the service at some point in the future because I would be totally made up if they did add those to the streaming service 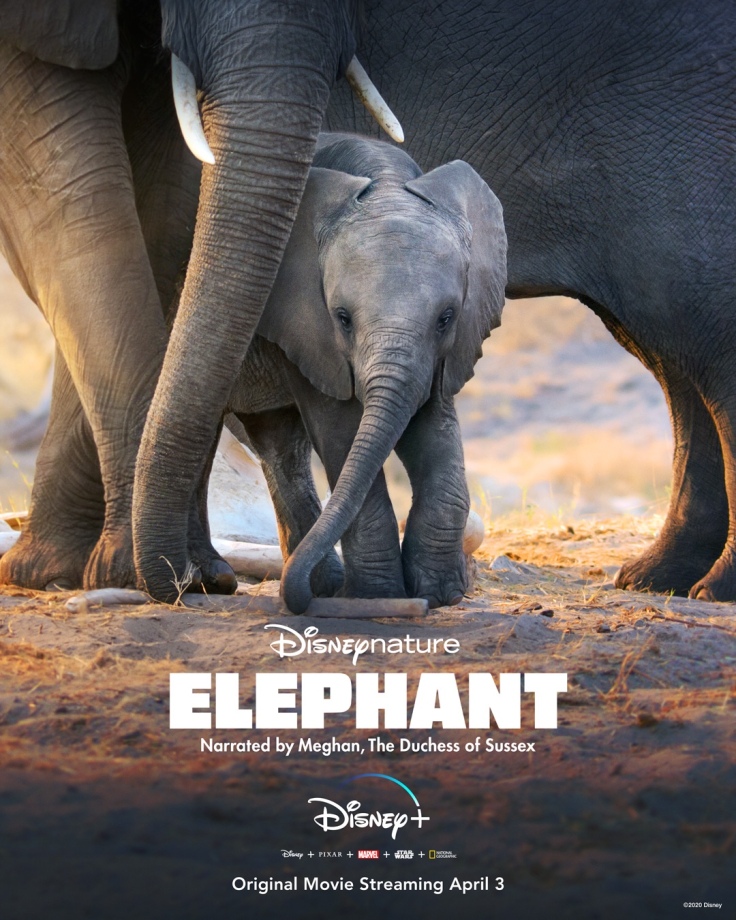 The first wildlife content that we will be getting on Disney+ from 3rd April is called Elephants and it’s a documentary movie about Elephants in the wild and is voiced by The Duchess Of Sussex, Meghan Markle, now some of you may or may not remember but earlier in the year there was a video that leaked online of Prince Harry, her husband, who spoke to Bob Iger Who at the time was CEO of Disney and basically “pimped her out” to the CEO of Disney, Bob Iger was really impressed with the fact that Meghan has voice over experience in her CV so has got her to be the voice over for this documentary, I’m not complaining about this though because I am sure that she will do a fantastic job of it… if I do get round to watching this then I will do a future review on this on my blogging website 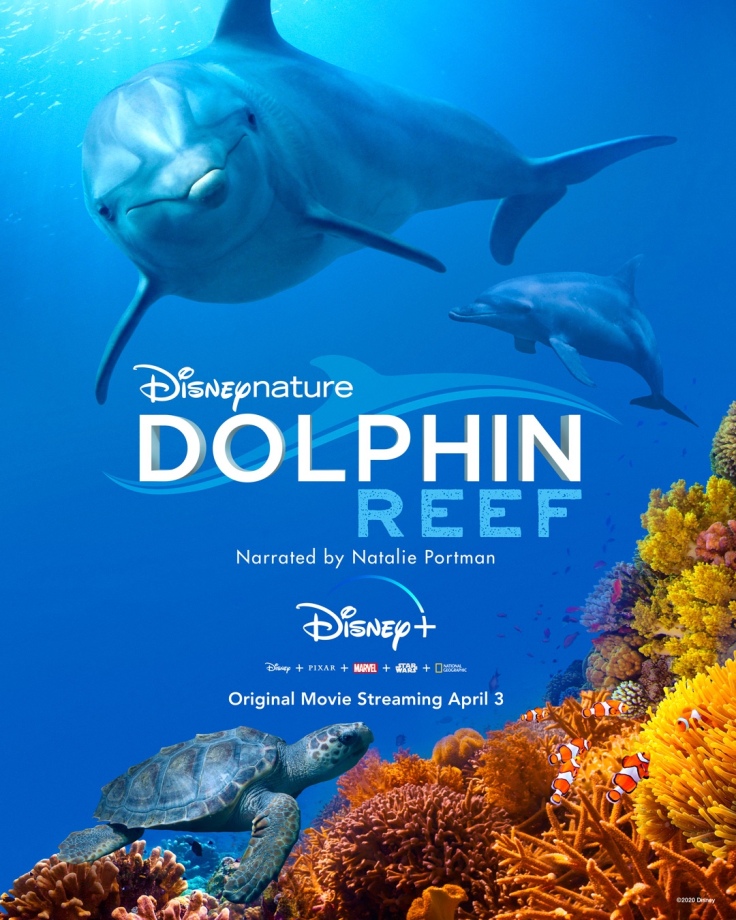 The other wildlife documentary that’s coming to Disney+ on 3rd April is called Dolphin Reef and this is all about Dolphins and how they live underwater, I really can’t wait to see the beautiful and fantastic footage of this, I have seen the trailer for this and it looks fantastic plus it’s a documentary voiced by Natalie Portman (who needs Attenborough) so Disney are doing these documentaries with two big showbiz names and I am sure that this won’t be the last big names who will be doing wildlife documentaries in the future for Disney+

So that’s my review for Disney+ I am really enjoying the streaming service despite watching very little content on the service at the moment (I have so much content that I am currently watching on Netflix which I’ll be giving the review treatment in the coming days on my blog) but I definitely recommend giving this streaming service a go because there so something for everyone on there and while we are in lockdown here in the UK at the time of writing this, there is no better way to spend it than with the Disney family